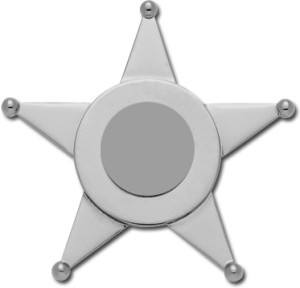 There’s been lots of lawmen associated with the old west. The Utah Territory had Porter Rockwell, and my great grandfather, Wild Bill Hickman – to name just two of them. One name that is not remembered by many was a short-term lawman from Pioche, Nevada who came to Utah in 1880 to take over the legal duties as a kind of “private marshal” for the mining town of Frisco.

After the botched election of 1880, the townspeople of Frisco decided it was high time for them to take the law into their own hands. The Sheriff of Beaver County wouldn’t dare venture into the western part of the county for fear of his own life, and the people of Frisco, especially the businessmen of the town, were getting weary of the general mayhem that occurred in the saloons and streets– especially on the weekends when the miners got paid. So, they assigned a committee selected from the law-abiding citizens to search for a candidate to take over the legal duties of the town. They didn’t have to go far.

In 1880 the stage line ran from the railroad trailhead at Juab near Nephi south along the Sevier River to the point where it emptied into Sevier Lake, there the line followed the Beaver River upstream southward to the site of Milford, and then west to Frisco. From Frisco it continued southwest across the Wah Wah and Pine Valleys, to Hamblin Valley, into Nevada Territory and the mining camp of Pioche. Now, Pioche wasn’t much different than Frisco with the exception that it had better law protection, and there the committee found a man named Pearson who fit the bill for everything they were looking for.

When Sheriff Pearson was sworn in as the town lawman in Frisco, the law-abiding citizens of the town were relieved that they finally could sleep at night. Here was a large, strapping gunman who spoke quietly and reassuringly to the citizenry. He told them he would clean up the town. His salary was relatively small, covered in part by the Horn Silver Mining Company itself. He believed in justice and would, therefore, take his living from those rascals who were causing problems in the town. He put a bounty of $10 for every “problem” he solved.

As the story goes, Pearson lived up to his promise. It got to the point where the town had to hire a man to go around in the morning and pick up the corpses of those Pearson left lying around from the night before. He would load them into a wagon and cart them off to the cemetery south of town. Even today a visitor to the old Frisco cemetery will notice that there aren’t any headstones in the southeast corner of the fenced-in plot. This is where Pearson’s victims were placed in shallow graves. It also contains the remains of men killed in mining accidents, but whose family ties were unknown.

Pearson cleaned up Frisco all right. It got to the point where miners hardly ever showed up in the saloons for fear of being one of the marshal’s bounty. They gathered, on a Saturday night around campfires near the Horn Silver Mine and exchanged curses directed to the sheriff for the dryness of their throats. The businessmen of Frisco – earlier supporters of the new lawman – started to grumble at the swiftness and totality of Pearson’s “clean up,” and the resultant downturn in the economy.

The marshal raised his cost of bounty as the population thinned on the streets and in the saloons.

Now, it’s not really known what became of the good marshal of Frisco. Some say he was shot by person’s unknown and hauled off by his own wagon. Others say he just suddenly disappeared from the town. At any rate, Frisco quickly regained its reputation for wildness – at least for a few years.

Keeper of the Tales of the Old West. View all posts by dochickman